It all began in Vietnam. After adopting a child from Saigon, Vietnam, Pam and Randy Cope found that Touch A Life could make a difference more than just one life. A couple that they had met in their travels opened their eyes to the cycle of poverty, child labor, and human trafficking.

“It is estimated that there are approximately fifty thousand street children in Vietnam – kids younger than sixteen who earn a living on the street. Referred to as bui doi, or ‘dust of the earth,’ most work in the cities of Saigon, Hanoi, and Da Nang, up north, but come from rural areas where 90 percent of people live in poverty.” These children work mainly on the streets, and earn an average of $1.25 per day to support their families living in more rural areas. With little supervision, these children are incredibly vulnerable not only to everyday violence, but to being swept into labor or sex trafficking industries. (Jantsen’s Gift) 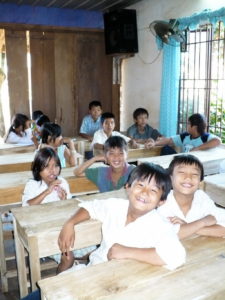 The Copes knew that they could not end all child trafficking in Asia, but it was possible to help some vulnerable children. So, in 2000, Touch A Life rented an apartment large enough for 15 children, hired a set of house parents, and enroll all the children in school. Not long after that, we repeated the process with another 15 children – keeping them safe from a life of exploitation and abuse.

In 2001, Pam was introduced to a woman named Marie caring for AIDS orphans in Cambodia – a country bordering Vietnam with many similar child trafficking issues – and in 2001 Touch A Life began supporting a home for vulnerable children called Place of Rescue, run by Marie and a Cambodian staff. Cambodia faced a massive civil war and genocide in the 1970’s followed by an AIDS epidemic. Its people are still struggling to recover, and, as a result, they face extreme poverty and widespread corruption.

Today, Touch A Life is still deeply involved in our work in Southeast Asia. Though we can’t always communicate details about the children we care the way we’d like to due to safety concerns, we are taking the month of January to reintroduce and update you on the thriving children and programs.

In Vietnam, there we continue to support 30 children full time in two large apartments. These children were either orphaned or abandoned, leaving them vulnerable to abuse and trafficking, but are now cared for in every way. As children have grown, they have been placed in educational or vocational programs to ensure that they are self-sufficient before becoming independent. Touch A Life also helps to support an enrichment program which provides assistance school tuition, food, and day care for an additional 150 children in the local neighborhood. 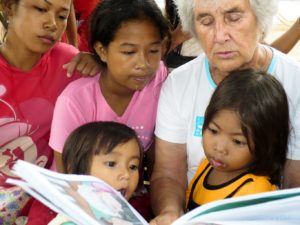 In Cambodia, Place of Rescue is home to approximately 220 orphans and 25 destitute elderly women. In addition, 33 children live with their parents who have been diagnosed with AIDS in one of 15 houses on the main property outside of Phnom Phen. All of the children attend an on-site school. Place of Rescue expanded with a two additional campuses one in Mongkol Borey, Cambodia, housing 100 orphans, and one in the province of Pailin, near the border with Thailand, housing 45 children. Marie, founder of the organization, is now 81 years old and still wholly invested in the beautiful mission she began.

Throughout this month we will be sharing individual stories from our team and from the children in Touch A Life’s programs in Vietnam and Cambodia. You can follow along on our Facebook, Twitter, or Instagram accounts, or sign up for our email newsletter.

open all | close all

Your support makes everything possible.